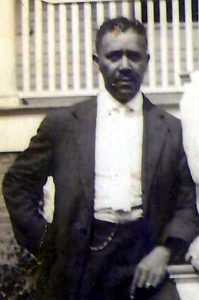 Lemuel Evans was born March 15, 1867 in Amelia County, Virginia. In later US Census interviews he would describe his parents, both born in Virginia, as employed as “servants”. It’s altogether possible that, up until a few years before his birth, they were slaves. Those same US Census interviews disclosed that he was educated through the 8th grade and could both read and write.

In 1891, Lemuel joined the exodus by large numbers of Blacks from the South to the North. A significant number who settled in Cranford were, like Evans, from Virginia.

Evans’ arrival here couldn’t have been better timed. In 1889 the Cranford Casino had incorporated and the following year issued its first shares. 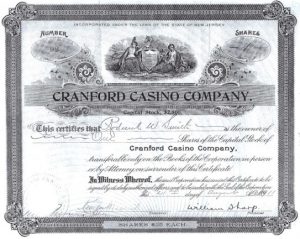 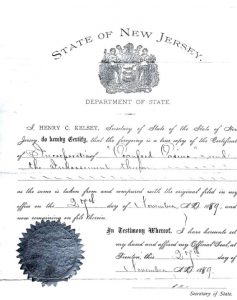 In 1892, the First Cranford Casino building, designed by local architect Frank T. Lent, was erected at the corner of Casino Avenue and Riverside Avenue. Lemuel Evans was selected as its first (and only) steward, a position he held until the Cranford Casino went into bankruptcy during the Great Depression in 1933. 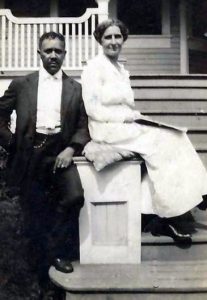 In 1900 Lemuel Evans married 26 year-old Irene Fowlkes. They would make their home at the Cranford Casino for the next 33 years. Daughter Ruth was born there in 1900, followed by Lillian in 1906 and Edith in 1910, all born at the Casino. This 1907 photo from the CHS collections shows young Ruth working in a garden at the Casino with her parents. (It has a very “American Gothic” feel.) 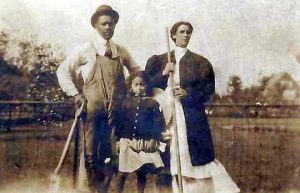 Ruth and her Parents Gardening 1907

A photograph of Edith and Ruth taken at the Sperry greenhouse in 1918 appears on page 67 of Bob Fridlington and Larry Fuhro’s Images of America: Cranford Vol II. 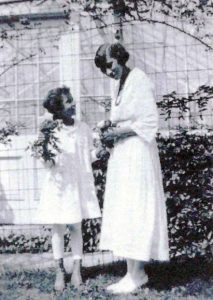 Ruth would graduate the State Normal School in Trenton and take additional course work at Columbia University. In 1925 she married Burnett Griggs of Princeton and became a public school teacher there. Lillian, of whom we have no photographs, would marry Roderic Jones of Memphis in 1938 and live in New York City where she was employed as a social worker. Edith appears to have gone to the State Normal School as well. In November, 1931, her father questioned the Cranford School Board at a public meeting as to why his daughter had not been one of the five Normal School students allowed to practice teach at the high school, since she had applied in May. He was told that the application was never forwarded to the Board and it now was too late to entertain it.

Life After and Away from the Casino

The collapse of the Cranford Casino must have come as a shock to Lemuel and Irene. In one fell swoop, Lemuel’s employment and their home were taken from them. What to do?

Lemuel’s obituaries in 1955 stated that he engaged in the real estate business after the collapse of the Casino. While specifics of that business were not uncovered, newspaper entries much earlier indicate that the Evans were quite involved in local real estate. An April, 1897 Cranford Chronicle article about the erection of a new Baptist church stated that the old building was purchased by Lemuel Evans for $200 and moved to his adjoining lot. Later that year he bought two adjoining lots at High Street and Chestnut Street.

A 1901 Cranford Chronicle article said that Lemuel Evans proposal to pay $100 for the town’s interest in a lot on High Street was accepted. (This must be the lot at the corner of High Street and South Avenue from which he would sell firewood for 10 years.) A 1907 Cranford Chronicle article identified Irene Evans as one of several residents asking the town for the privilege of paying sewer assessments in installments. You can’t owe sewer assessments unless you own property. Finally, a 1909 Cranford Citizen article recorded the sale of 104 High Street by Lemuel Evans to Joseph Bailey.

Lemuel’s main source of income after 1933 may have been from the sale of firewood and kindling. Advertisements for this service appeared regularly in local newspapers from October, 1934 through December, 1943.

The Evans’ first listing in a Cranford Street Directory for an address other than the Casino was at 206 North Avenue East in 1935 and then again in the 1938-39 Directory. Sadly, Irene passed away at home the morning of December 29, 1937 at age 64. No cause of death was given. 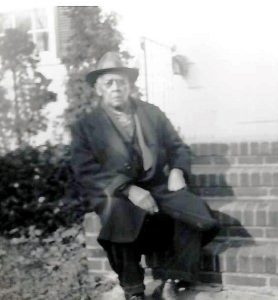 Lemuel Evans’ obituaries in the The Cranford Citizen and Chronicle and the Elizabeth-Daily Journal recognized him as an active member of the Cranford community. He was a member of the Elks, vice president of the Negro Democratic Club, an active member of St. Mark’s AME Church, and manager of a baseball team (not the vaunted Dixie Giants, which was formed and managed by Ernest E. Tyree). During the Great Depression he served on the Investigating Committee of Cranford’s Central Relief Committee. As steward of the Cranford Casino, Lemuel Evans was a witness to the very heart of Cranford’s early 20th century social life.