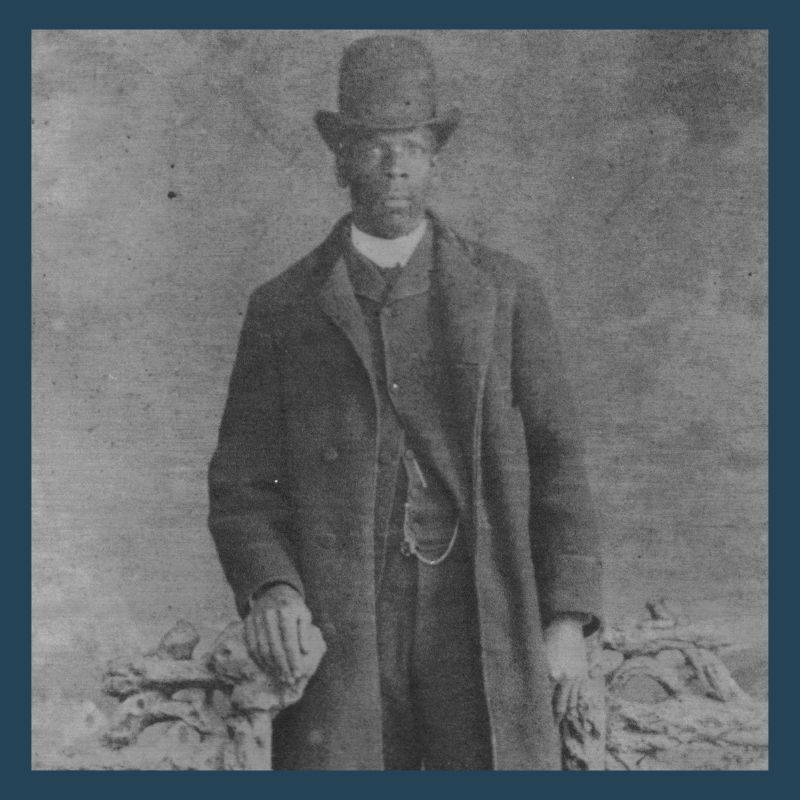 The following was researched and written in 1996 by Robert Fridlington, long-time member and curator of the Cranford Historical Society.

Joshua Bryant was not a man to let obstacles stand in his way.  Bryant was one of a number of African-Americans who migrated to Cranford from the American South, particularly from Virginia, in the last third of the nineteenth century.  Through his ability and resourcefulness, he established himself as a prominent figure in Cranford.  Without formal training and despite prevailing attitudes, he became Cranford’s first African-American law enforcement officer, the first African-American elected to public office in the township, and an influential figure in local politics.

Joshua Bryant was born in Virginia, probably in 1852, the son of George and Rachel Nelson Bryan.  Nothing is known about his parents or his early life.  As he was born in a slave state thirteen years before slavery was abolished, the question naturally arises as to whether Bryant was born a slave.  This is just one of several intriguing questions about his life for which we have no answers as yet.

Bryant came to Cranford about 1873, and lived here for the remainder of his life.  During the 1870’s, he worked for a time as a coachman.  When Bryant arrived in New Jersey, he probably found life a little different from what he had known in Virginia.  During the Civil war, there had been widespread support for the Confederacy in New Jersey, and many of the attitudes and prejudices of the war years were carried into the postwar era.  There was particular opposition to proposals for extending political equality to blacks.  In February 1870, for example, the New Jersey legislature voted against the ratification of the Fifteenth Amendment, which would protect the right of all citizens to vote regardless of race, color or previous condition of servitude.

Despite this opposition, the amendment received the necessary support in other states and was declared ratified the following month, thus becoming part of the United States Constitution.  New Jersey, however, held firm.  Not until 1875, ten years after the conclusion of the Civil War, did the state strike the word “white” from its suffrage laws and officially grant the right to vote to its black citizens.

At the same time, conditions in New Jersey did offer a measure of self-respect and some possibility for future advancement.  Joshua Bryant was not a passive participant and wasted little time.  In 1876, he appeared before the town clerk, paid the required $1.00 poll tax and qualified himself to vote.  But this was only the beginning.  Like most African-Americans of his day, Bryant was a staunch Republican and although blacks frequently complained that the G.O.P. was virtually ignoring them, they continued to give their allegiance to the party of Lincoln and Emancipation.  Bryant displayed considerable skill in dealing with men and events, and before long he was wearing the mantle of black leadership in Cranford.  He worked energetically on behalf of the party and within a few years he had become, according to the Cranford Citizen, “quite prominent in Republican politics.”

On February 26, 1880, when he was about 27 years old, Bryant married Miss Margaret Taylor in the Baptist Church in Westfield in a ceremony witnessed by the congregation.   The Bryants lived on Mulberry Street (Retford Avenue today) which at that time ran between Lincoln Avenue and Cherry Street.

In 1881, Bryant was elected constable and became the first African-American to hold elective office in Cranford.  Although the position was part-time, it conferred the authority of a sworn officer of the law and it carried with it the celebrity that goes with public office.  A constable, after all, represented the police power of the community.

From the police blotter and reminiscences of E.K. Adams, who was Bryant’s friend as well as Captain of the Cranford Thief Detecting Society, one gains a picture of Bryant as an able and fearless peace officer.  Certainly the residents of the town must have been pleased with the way he carried out his duties, because they re-elected him as constable in 1883, 1887, and 1890, each time for a three-year term.

A highly visible community leader, Bryant was a prominent member of the original congregation of the First Baptist Church of Cranford and was active in the local Sons and Daughters of Charity Society.  He was best known, however, as a political activist and as a leader of the local Republican Party.  And he was no stranger to controversy.  In 1896, the Republican Party in Cranford was in turmoil and Bryant was one of several prominent Republican dissidents who broke with the leadership and bolted the party.  Throwing his support to the opposition, he helped to unseat two Republican stalwarts.

Bryant’s action took a great deal of political courage.  He had been a respected member of his party.  The future looked bright.  But now, with feelings running high, his political career appeared to be over.  The actual events that led Bryant to defy the party regulars are not entirely clear, but it is quite apparent that he was expressing not only his own dissatisfaction but that of Cranford’s black community which was growing increasingly embittered toward the policies of local government.

Then as now, party members could be forgiven a fall from partisan grace, especially if they were skilled political managers, so before long Bryant was welcomed back into the Republican fold.  Some measure of his influence can be taken from a note contained in the Cranford Chronicle on Election Day, November 8, 1898, less than one month after his death.  The brief item was actually an unflattering barb directed at George W. Littell, a Union County Freeholder and the leader of the Cranford Republican Party.  “Without Josh Bryant on Election Day,” the paper gibed, “George Littell is like a wagon without wheels.” Bryant would have enjoyed that.

Following a lingering illness, Joshua Bryant died of complications from asthma on October 12, 1898.  Only 46 years old at his death, he lived in Cranford for 25 years.  His funeral at the First Baptist Church was one of the largest ever held in Cranford up to that time.  The Reverend W.A. Harris conducted the service, assisted by members of the Passaic Lodge of Odd Fellows from Newark, seventy of whom escorted the funeral procession from the church to Fairview Cemetery in Westfield where he was buried.

It is unfortunate that not more is known about Joshua Bryant’s life and work, for his is unquestionably a remarkable story.  A man of talent and strong conviction, who overcame great odds, he successfully joined his dedication to public service with his love of practical politics and in the process served his neighbors and community well.  Today, Bryant is remembered as Cranford’s first African-American law enforcement officer and the township’s first African-American to hold elective office.  But he should also be remembered as someone who helped make Cranford a better place for generations who followed.

The Joshua Bryant memorial was dedicated on Memorial Day weekend, Sunday, May 26th, at Fairview Cemetery in Westfield.  The granite marker reads as follows: