Warning: "continue" targeting switch is equivalent to "break". Did you mean to use "continue 2"? in /homepages/37/d284817687/htdocs/clickandbuilds/CranfordHistoricalSociety/wp-content/themes/Divi/includes/builder/functions.php on line 5812
 “The Venetians of New Jersey” – A Harper’s Weekly Article (1908) | Cranford Historical Society
(908) 276-0082 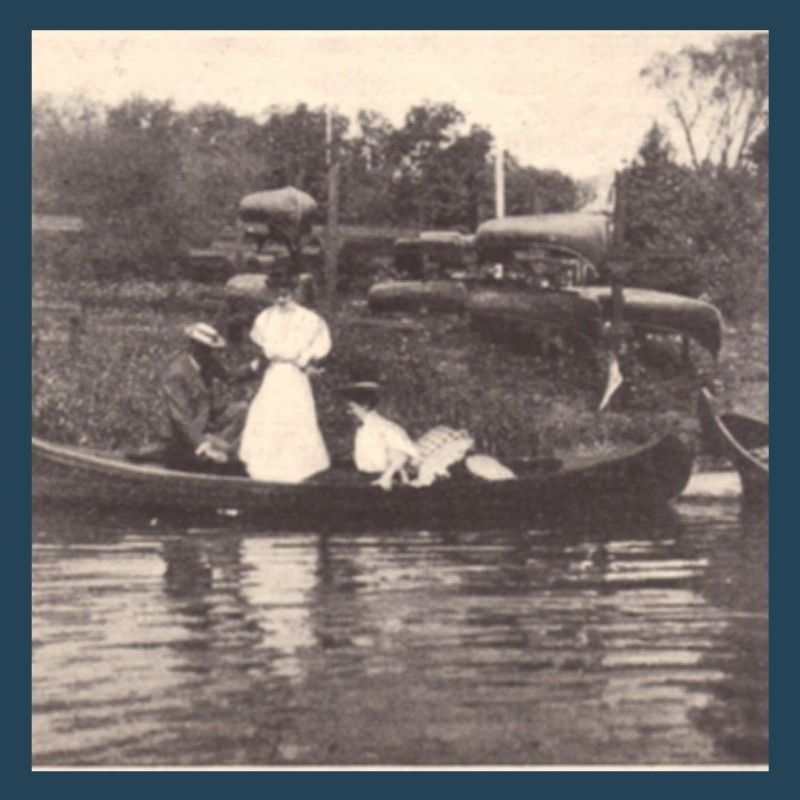 With the Spring season upon us, we are pleased to hear that the Cranford Canoe Club will be opening for the 2021 Season this weekend, April 24th!  The Rahway River coupled with the Cranford Canoe Club has always been such an attraction for the town of Cranford and so many of its residents and visitors look forward to spending time on the river each year.

The following article is reprinted from Harper’s Weekly, September 12, 1908.  As you will see, the author, Frank C. Drake, was so enchanted by his visit to Cranford that he could scarcely find words to describe the town’s “Venetian aspect and its charm.”

Years ago, Harper’s Bazar[sic] printed a comic drawing which has always stuck in my memory. It showed the interior of a car on a suburban railway train.  The brakeman was shouting the name of a station in at the door, and a placid-looking old lady, oblivious to the smiles of the seasoned commuters, was turned round at him in her seat with an expression of amiable astonishment.  Under the picture was this legend:

Old Lady (stranger in that State)—“Well?”

Well, just beyond Elizabeth lies Cranford the unique, the town of canoes, the Venice of New Jersey.  Being the latter, it naturally holds an annual carnival, a picturesque event in New Jersey’s suburban life.  The picturesque has been unpicturesquely described as the pleasing adaptation of external things to the needs of life itself: just as an ugly alleyway becomes picturesque when for some reason a bridge is thrown across it to connect the buildings on either side.  Wherefore do I declare that Cranford is picturesque because its people have harmonized their social life with the presence and the twisting of the Rahway River.  And in this they have done honor to all of us Americans: for they are evidence that we do not hold ourselves worthy because we are successful, and that we are not successful because we are materialists; but that we are what we are because we have imagination, and in this wise rank as poets.

Generously spread out over its shady square miles, Cranford is typical of hundreds of suburban towns.  By day its men are in the city skyscrapers, dictating and telephoning their ways to fortune; its women at home with bridge and embroidery.  After dinner it ceases to be typical and becomes the New Jersey Venice.  For through the town meanders the Rahway River, not with a simple bend here and there, but with serpentine curves, doubling back and forth upon its own length, now retracing its course as though it had forgotten something at home, now winding about as if from sheer and loving reluctance to leave the gentle habitations of men.  Straight, surveyed streets cross it, and then cross it again farther on, and their fellows at right angles meet its lingering curves most unexpectedly in distant outskirts.  Now, in the geography of such a town as this it is inevitable that nearly everybody’s lawn must touch the river at some point no matter what street he lives on; so that, as you drive through the shady streets with their many bridges, you will see few lawns or dooryards without the distinctive hallmark of Cranford—a canoe upturned on the grass.  And even those apparently inland from the river have their canoes in evidence, for many streets follow the courses of straight brooks which empty into the Rahway, and people living along them have but to push their shells from the lawn to the little stream which skirts it, and so float them to the river itself, perhaps in the next street.  Indeed, a quaint feature of Cranford is the number of little private bridges leading from dooryards to sidewalks across these intervening brooks.

In this environment, therefore, it was but natural that the canoe should become more than an incident to recreation: that is, it was natural for it to become so in the hands of—well, practical poets, like ourselves and the Cranfordians.

So it came to pass—years ago, no doubt, but unheralded to the world till now—that Cranford people began to use the canoe as a vehicle for social intercourse; and now—Ah, you should see the Rahway River there in the peaceful summer twilight after dinner! 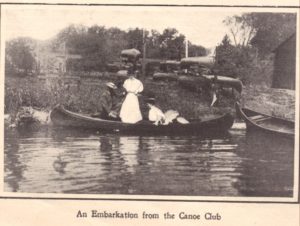 Softly, to and fro upon the placid windings of the stream, cleaving the sunset lights and shadows mirrored in its depths, glide the canoes of all who love their neighbors.  Friends meet in midstream to drift side by side with gossip and cigar.  Sweethearts meet fellow sweethearts and their laughter mingles with the purl of the dipping paddles and the soft good-nights of the mated birds overhead.  Maids in white lawn and mothers in gray, shirted youths and grizzled fathers cruise from landing to landing among their neighbors to discuss hats and cookery, football, politics, and stocks.  Here the sheen of pretty hair, there the movement of fair, white arms, yonder the crimson pillow of a back rest.  Over all a peace and fellowship and sense and decency that make for a civilization which is of the soil, and, it struck me, healthier for us practical American poets than the restaurant culture which we have been importing of late years.

And now the sun is down.  Lights are moving up and down the Rahway, and the fireflies on the shore lawns are all but outdone.  Not much else is to be seen, but there are things good to hear if your heart has stayed young.  There is the tinkle of a mandolin around the next bend, there is the soft humming of a girl’s voice where that light is drifting, there are whisperings near and boyish tenors in the distance; and on the night I saw and heard these things there came to me from midstream a tenderly deprecating “I’m sorry, Jack”—and I knew that the world was still turning normally on its axis.  I had heard it creak.

Of course with all this sort of thing and so many canoes there was bound to be a canoe club.  If there hadn’t been, this article never would have been written, because it was the annual Canoe Carnival which took me to Cranford. 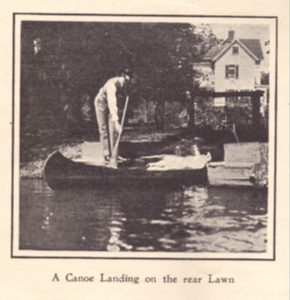 This event has since come to be regarded as the culmination of summer entertaining in the Cranford section of New Jersey.  Special trains are run from all the surrounding towns, the river is strung with myriads of Chinese lanterns, and along the banks are erected booths of gaily-colored canvas, in which refreshments are dispensed by all the pretty girls who aren’t booked for the river pageant.

The climax of the evening is the grand illuminated pageant of the hundred and more canoes in Cranford, valuable prizes and trophies being offered by the club for the most beautiful and novel decorations and lighting effects.

But it is the quiet evenings on the river, with neighbors chatting as they drift along together or calling in recognition as they pass, and all so simply and naturally, that you forget the uniqueness of it that gives Cranford its Venetian aspect and its charm.